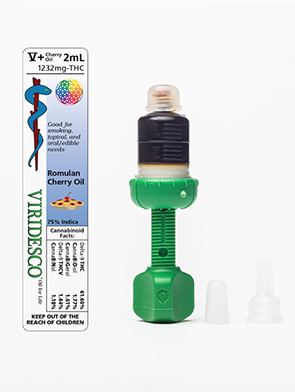 This oil is made from Romulan flowers grown on Vancouver Island, in beautiful British Columbia! Romulan is a legendary Indica-dominant strain. This strain wraps the user in a euphoric blanket of bliss while also stimulating the appetite. Snacks should be kept close as the “munchies effect” of Romulan is very strong even for experienced users. This strain is most often chosen by those dealing with insomnia and as such should not be used during the day. Users seeking pain relief often find that Romulan may relieve even some of the worst chronic aches and pains. Others choose it to alleviate the effects of stress and anxiety disorders, depression and various stomach problems. This cherry oil has been independently tested at MB labs to contain over 68.39% cannabinoids, including 61.60% THC!